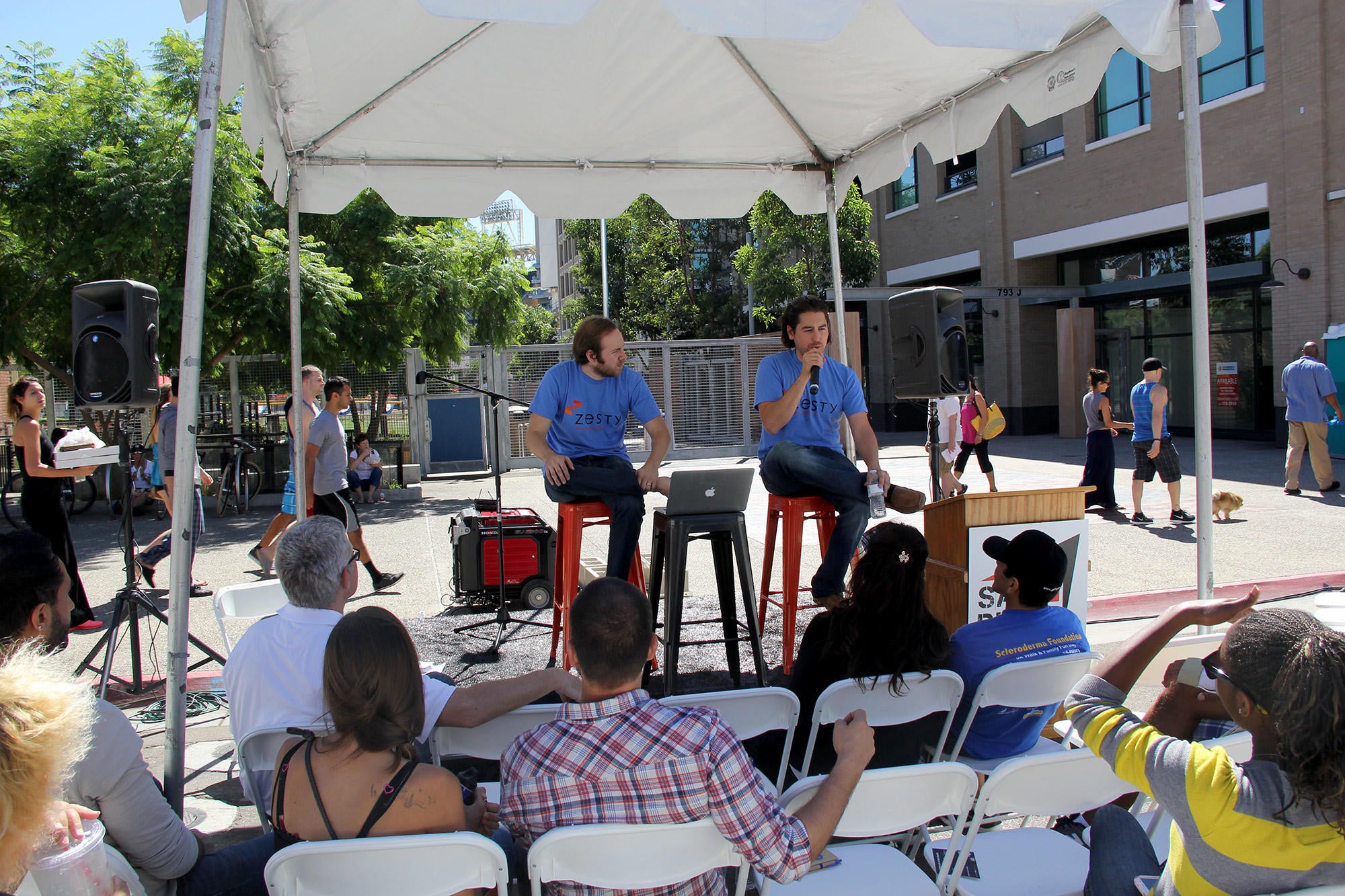 A lot went wrong before we sat down on those orange stools and delivered our speech and product to the crowd. To start, the demographic of the crowd was not known, particularly because our speech was mis-titled on the event handout. Second, there was barely enough room for two of us on stage. Third, there was no projector tech for our slide presentation. To top it off the second microphone was creating bad feedback and the crowd was baking in direct sunlight. As I learned, public speaking at big events may not always be smooth.

Take time to deliberate but when the time for action arrives, stop thinking
and go in.
—Andrew Jackson

It was high noon in San Diego, the sun was blazing, and there was no shade over the audience. The speaker before us was struggling to keep a crowd. We had to do something.

The stage tent was casting a shadow, so we rounded up folks to pull the stage back and move all the chairs foward underneath the shadow. We had cold water bottles at our trade show tent, so we lined the front of the stage with bottles in hopes to attract passer byers and keep people around. We knocked the podium off the stage to the side and set bar stools from our booth on the stage instead. We took a third bar stool and turned it into a laptop stand facing the audience. By the time we got introduced, everything seemed good, until the second mic was deemed unusable.

This was my first time speaking at a big public event.

It was much different than the typical organized speech when you know your audience and can prepare your topic. We had 1 hour to entertain people in the blazing sun, which is a lot to ask. We had to improvise a lot.

When the second microphone wasn't usable, rather than playing with it and potentially losing the crowd we gathered, we went one mic between the both of us. While we introduced one another we had the people in front pass the cold waters to those behind them. In an open public event, people can just get up and leave; the water kept them around.

Immediately, I knew the crowd wasn't fit for what we prepared.

As you can see in the image, all there is behind us is Petco Park. We did not have the safety blanket of screens or projectors. We only had ourselves and the crowd, and this needed to last for an hour. I immediately start engaging with the crowd, asking: "Who here has a website? Let's see a raise of hands?"  But there was little response from them. "Come on, let's see."

They started raising hands, and I attacked.

I picked on the poor girl to the left, and she talked uncomfortably, so I moved to the right, getting feedback from everyone and listening to their woes they have with their current websites. This was perfect and lets us segway into parts of our speech that were relevant.  It also allowed me to pass the mic and say, "let's get a response from Andy".

Synergy hit, and the crowd was engaging with us.

This lasted for roughly 25 minutes before I could feel us losing the crowd. The idea going into the speech was to not pitch our product hard, but rather to be a valuable resource to the crowd as experts on a range of topics and send them to our booth afterwards. The crowd was done with us being experts.  They wanted to know about the product on our shirts. Right about this time, someone in the audience asked about the difference between a competitor and our product. That set it off, and everyone from there on out started asking questions about our product.

The crowd took the lead.

At one point, I handed the mic out to someone in the crowd to talk about their experience with our product. I had asked this person to visit the night before over a text message.  Having him there was key. The Q&A went great for 20 minutes before the San Diego sun started to win. We ended our session on a high note about 15 minutes short.

Key takeaways from speaking at a big public event:

This event had roughly 3-4000 people, attendance to talks were unknown, and the audience type was unknown. Here's what to do if you find yourself in that position.

In the end, speaking isn't a scripted performance:  It's an exercise in improvisation. Enjoy it! 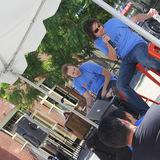 At one point I wanted to put my water bottle down. The angled podium was a bad idea, you can see me using my leg to shift my weight to recuperate as I snatch it from falling. Potentially an embarrassing moment. 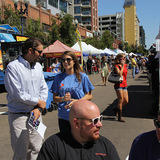 We had field workers by Randy Apuzzo

Having other team members in the crowd really made a difference. As they asked question, Morgan was on the ball to assist them with material. 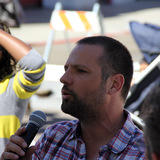 Having a person in the crowd who knew the product was key. I wish I could have said I planned it that way! If you can pull this off naturally, do it. Otherwise careful it do not look like a set, or it could become a big disaster. 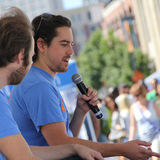 You can see a good gust of wind blowing my hair. If you are outside, consider the wind will blow away your note card or just your hair in your face if you are long haired like myself. I had to put my glasses up to hold my hair back, which to me doesn't feel very professional. 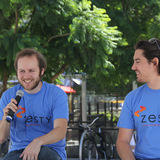 Jokes are good when public speaking by Randy Apuzzo

People are people. They want to learn, but they won't mind a good laugh. In this image you see Andy and I laughing over what was said at that time.