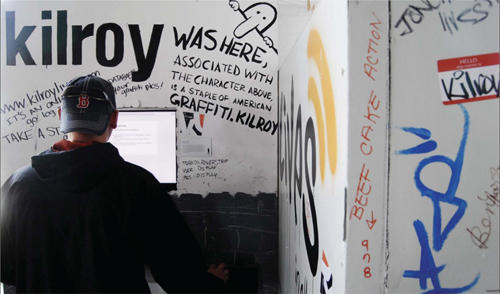 There I am shutting down the server the morning after. Who would have know the art venue wouldn't have internet? My server became a giant slideshow, rather disappointing.

Kilroy Lives was about what people write in private. The concept was to collect bathroom graffiti and categorize it. All graffiti is to be categorized and tallied by location/city/state.

This was one of my first opportunities to deal with mass amounts of data, and organize it. The move was to create a community database open to the public. The database can now generate up-to-date conclusions, tally percentages, and habits.

In terms of popularity, the graffiti artists that painted on walls did not like the concept. Clearly they did not want anything incriminating of theirs to be posted on the internet. The bathroom art concept can still be real, but I do not see any revenue model for it, just fun and jokes. Still going strong Kilroy will live forever.

Photos of the Kilroy Process 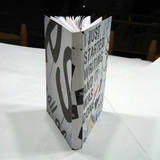 The spine and build. I wanted the book to feel like a graffiti ridden stall. 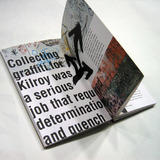 Process book inside by Randy Apuzzo

Notice how the pages spread are crazy and erractic. I had a lot of fun with this one compared to the very typographic heavy books done in the past. 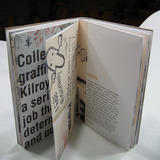 Another taste of the grid peaking through. I know to use larger margins now. 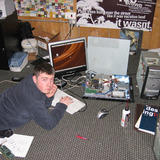 Justin sherlock with the kil box by Randy Apuzzo

Big shout out to Justin Sherlock, on the floor jamming on the Kil box. A linux unbuntu blade, donated from verisign, which was mounted to counter weight the urinal.

Laura Franz! One the best comments on someones graffiti "Times New Roman". The funny thing, as a student of Professor Franz I set a my final process book in Times New Roman (just to drive her nuts). Laura has some great things going for online typography, she runs www.goodtextfonts.com, which combats the use of default Times New Roman!

The kilroy lives logo. Kilroy is written in a conventional sans-serif typeface (Univers 67 Bold Condensed) and Lives is hand painted with India Ink and a Sumi brush. The orange waves represent the RSS symbol, to connect Kilroy with the internet. 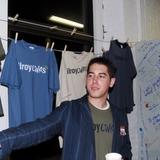 Picture taken by a fellow student, you can see the t-shirt (which were handed out) and the installation around me with lots of writing already present. 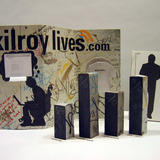 This mockup was made with a gluestick, 110lb printer paper, and an exacto. The orginal concept was to have pedastals that represented a life size bar graph. The final installation had t-shirts on a clothes line above the toilet across the stalls. The computer stayed in the wall, but had a urinal installed to hold the keyboard. This way people would be standing at a urinal to use the website. The life size graph didn't make the cut. 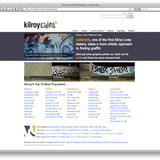 The website was the core component to the project. Its complexity consumed most of my time on the project. The website build isn't documented as well as the physical aspects, but can be seen live www.kilroylives.com 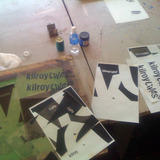 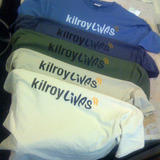 The final t-shirts came out great! It is hard to notice from an iphone picture, but Kilroy is in black, and lives is in Navy. The t-shirts were given out the night of the opening. They're orginals and will never be printed again.

The Kilroy installation by Randy Apuzzo

Here is the sheetrock build. I spent about $100 on materials. Constucted it to be a five peice modular setup, so it could be broken down and installed live in the gallery. You can see the urinal holding up the keyboard, it was lent by a plumber in souther Rhode Island. The toilet came from the American Legion. Cheers to my grandfather on the can who helped me along the way. 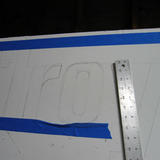 Hand painting the type at 1 in the morning. 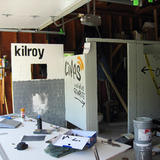 The next day it was ready, I had lost my mind working on it all night. Next step was to dis assemble it, put it in a truck and isntall it on stop at the Narrows Center for the Arts. The plan is to have markers all over the place to people can participate and graffiti all parts. 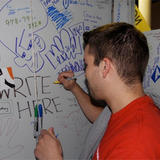 Installation was a success by Randy Apuzzo

The gallery opening was a huge success. Within an hour the installment was covered with foot traffic and was loaded with fresh content from people of all ages.

People at the installation by Randy Apuzzo

The installment attracted steady attention throughout the night of the opening. All I had was my iPhone, I'll know better to have a gallery opening without a camera! Look it's Kim Fox second from the right! 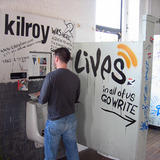 Justin Sherlock at the installation by Randy Apuzzo

The day of the show, there was no internet to be had!!! So the site could only be viewed locally. I had set a screensaver of 200+ photos of documented graffiti when people weren't using the site. Here is Justin, taking a leak! The stickers givin out where in the urinal, so you have to put your hand in the urinal to get free stickers! 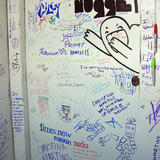 User generated content. Shout out to Nick Carrie with the Duckey Nugget! 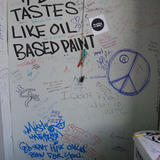 More user generated content. These shots were taken the next morning before breaking it all down. 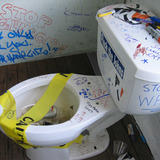 Graffiti on the toilet by Randy Apuzzo

Even the toilet got lit up! STOP WAR next to STOP WACKING OFF on the toilet cracks me up. 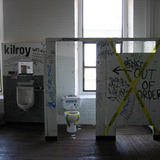 The full installation after being assualted by graffiti mayhem! 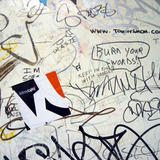 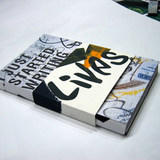 The cover to the process book. It was bound by kilroylives stickers and put together with scrap material from the t-shirt screen printing. Notice with the sleeve it reads "I just started writing lives" 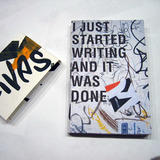 Sleeve of "I just started writing and it was done" It's how I felt about the process book. It was my last project as a student, it felt good at the time, but I'd love to go back :) 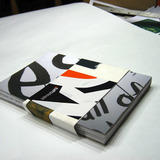 Process book back by Randy Apuzzo

The backside. I loved this composition as art, at this point I was doing whatever I wanted. Bringhurst was buried by the hype.