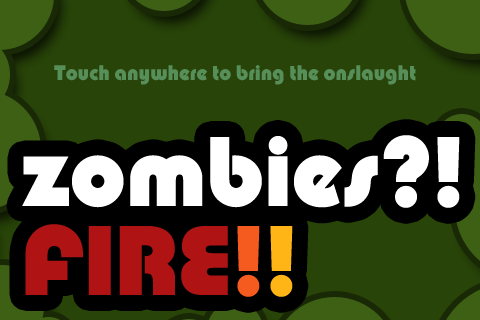 Sometime in July 2010 I had an urge for another attempt to design and develop a game. ZombiesFire! was the name. The concept started on a Plane ride home and came to fruition after 15 or so sketches in the moleskin.

I wanted to design simple throwback graphics with comic book like cut scenes. The ideas was that after fending off a barrage of zombies, you were rewarded with a tasteful comic scene, and then right back into the shit with zombies. Very similar to the way pac-man had mini cut scenes of the ghosts getting owned by the pie like pac-man. Though these scenes were simply stupid, they were very rewarding.

I got to busy with projects and paying the bills so ZombiesFire! took a backseat. It wasn't ready for the AppStore, but I'd like to retackle it again someday. One of these plane rides home. 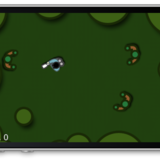 Zombies spawn from the tree edges. The green ones are fast but weak and are only worth 10 points. Look out for the red ones, they are strong and slow, but worth 30 points!

The level is a layer of grass, and a layer of trees. All transparent PNGs. 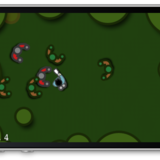 Once you start firing them down, they come in hordes. Each level ends after you annihilated X number of zombies. X increases as the levels progress.

There is no hiding or safety lol! 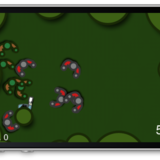 No hiding from Zombies by Randy Apuzzo

The Zombies ain't stupid, you aren't safe under that tree hero!

The touch interface is simple, tap with one thumb to move to where you tap and hold another thumb to layout the fire. Taking screenshots of the simulator didn't allow me to catch a screen with fire; I'll have to post a video. 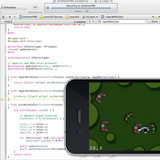 ZombiesFire! and Xcode by Randy Apuzzo

Xcode is a pain the ass to work with. Cocos2D is rad. The game was made of simple PNGs and a crazy algorithm that turned sprites to face a moving object while maintaing a smooth path. I never got it perfect. I should've paid attention in precalculus :) 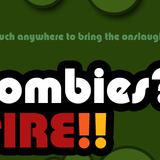 A fun opening title. I never have the opportunity to work with a different typeface. It was nice to have a big bubbly typeface with bold colors and letters.